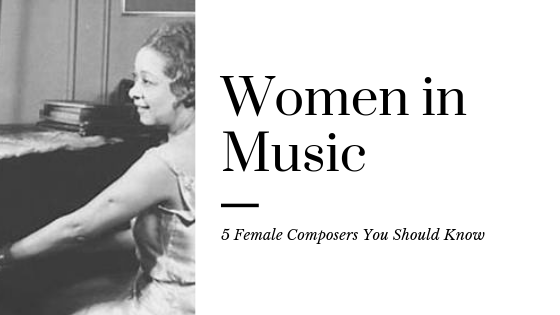 Because March is Women’s History Month, let’s take a moment to learn about and celebrate five great women in music history.

Nora Holt was born in Kansas City. She was the first African American in the United States to receive a master’s degree in music.  Singing at night clubs and parties in Paris, Monte Carlo and London, she was known as a free-spirited socialite of the Harlem Renaissance. She co-founded the National Association of Negro Musicians and worked as a music critic for the black newspaper, Chicago Defender.

Listen to an excerpt of Nora Holt’s Negro Dance here.

Amy Beach was America’s first successful female composer, making her one of the great women in music. She published orchestras, an opera, church music and symphonies.

While symphony composition was dominated by male composers of the time, the men of Beach’s generation recognized her as an important composer. After the premiere of “Gaelic Symphony” in 1896, the composer G. W. Chadwick remarked: “I always feel a thrill of pride myself whenever I hear a fine new work by any one of us, and as such you will have to be counted in, whether you will or not—one of the boys.” Despite Chadwick’s chauvinist assessment, his acknowledgement that women can equal their male composer counterparts in creating and performing beautiful music was a…step.

Hildegard of Bingen, considered to be the founder of scientific natural history in Germany, learned to read Latin and to sing the Psalms in a monestary at the age of 14. During her life, Hildegard composed over a hundred sacred songs. Her work was inspired by the Gregorian Chant which she sung on an often-daily basis.

Elisabeth Jacquet de la Guerre began performing music on the harpsichord and singing at the royal court of Louis XIV — the Sun King –when she was just 5 years old. She left her position as a court musician to pursue her own career as a teacher, performer, and composer.

While women in music were often considered scandalous and associated with loose morality, Jacquet de le Guerre changed this perception. She was a much sought after harpsichord teacher. Music scholars consider her sacred cantatas among the finest composed during the Baroque period.

You may know already of Fanny’s famous composer-brother Felix, but Fanny herself composed more than 460 works. A number of these works were originally published under her brother’s name.

These five women are only the tip of the iceberg when it comes to musical talent and contribution. I encourage you to keep learning, exploring and sharing about other women in music throughout history!

Building Strength and Finger Independence
Your Role in Your Child's Piano Practice.
When Can My Child Start Piano Lessons?

One thought on “Women in Music”