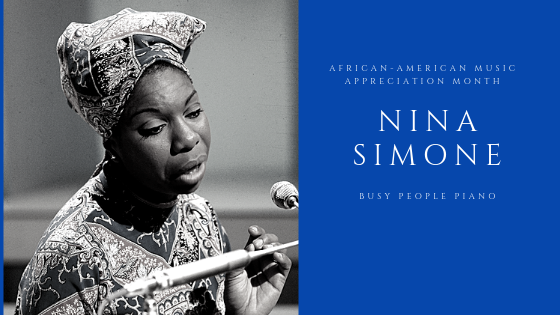 Since 1979, the month of June is recognized as African-American Music Appreciation Month. It’s a fantastic opportunity to immerse yourself in the music of black musicians, singers and songwriters.

One of my favorite musicians to listen to and learn about — whether it’s African-American Music Appreciation Month or any other month of the year — is Nina Simone.

the Life of nina simone

Nina Simone was born in North Carolina in 1933. One of 8 children, she began playing piano at the age of 3. At the age of 12, she gave her first concert — a classical piano recital. Her parents sat in the front row to see their daughter play, but were made to move to the back of the hall so that white folks could have the better seats. Simone refused to perform until her parents were moved back to the front!

Nina took piano lessons throughout her childhood and played for her mother’s church. She loved the classical piano composers, such as Bach, Beethoven and Schubert. Her goal was to become the world’s first African American classical pianist.

After being denied a scholarship to the Curtis Institute of Music in Pennsylvania, she instead began to play at Atlantic City nightclubs. At age twenty-four, a record label signed her.

Listen to Simone expertly transition from a jazz-style song into a Bach-influenced fugue one minute into this performance, and then back to Jazz again.

Simone became active in the Civil Rights Movement in the early 1960’s, taking part in the march for voting rights from Selma to Montgomery. She also wrote songs that discussed racism and the injustices of the Jim Crow laws in the South. She recorded many albums. Some of her music was boycotted in southern states, and many viewed her as “too outspoken” when it came to racism.

In 1970, she left the United States for Liberia and eventually lived in several European countries. She continued to tour and perform until she died at the age of 70, in 2003.

Listen to some of Nina Simone’s music using the links below. Notice how it is influenced by classical, jazz, folk, pop, blues and gospel.

I Loves You Porgy (her breakout song!)

My Baby Just Cares for Me

To further explore the life of Nina Simone, check out these wonderful children’s books on your next library visit.

Young Gifted and Black: Meet 52 Black Heroes from Past and Present by Jamia Wilson

Under the Moon: Jazz Standards and Lullabies by Misja Fitzgerald Michel